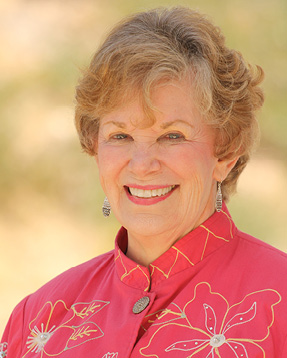 Founder and Board President

Margie Blanchard serves as the President and Board Chair of Blanchard Institute. She has built a dedicated team of individuals who believe that the world needs capable, empathetic young people who lead fulfilling and successful lives.

Dr. Blanchard has earned a reputation worldwide as a compelling motivational speaker, an accomplished management consultant and trainer, a best-selling author and an entrepreneur. She was the co-recipient with her husband, Dr. Kenneth Blanchard, of the Entrepreneur of the Year award from Cornell University.

Dr Blanchard is also the cofounder of The Ken Blanchard Companies, she works diligently with Ken Blanchard, developing their company into one of the premier management consulting and training companies in the world. Dr. Blanchard served as president of the company from 1987–1997, leading its rapid growth and success.

Coauthor of The One Minute Manager Balances Work and Life and Working Well: Managing for Health and High Performance, and Leading at a Higher Level, Dr. Blanchard is well-versed in a variety of topics and often speaks on leadership, balance, managing change, aging parents, and life planning.

In this program I learned how to set smart goals, how to understand myself and to know how to ask for help. Because of this experience, I now realize that I had plenty of assumed constraints that I needed challenging. I also learned to be more proactive when it comes to my life and the things I want to achieve.

This was such a fun and interesting program, I’m so glad I took it. I found this program extremely rewarding and useful for my daily life. I learnt how to set SMART goals and how to think and act like a true self-leader.”

This is a great! I have never heard any students speak of a program this highly as they have. I hope we haven’t set too high a standard!”

As the Director of the San Diego/Imperial County Workplace Learning Resource Center, I offer leadership training to all community colleges in the San Diego/Imperial County area. We’re using the Blanchard Leadership program and find that students are more confident and skillful and are taking charge of their lives at school and work. The program has been successfully launched at Grossmont and Cuyamaca Colleges, and we plan to expand to other colleges throughout the region.”

I think this class has prepared me for life. I feel more confident to take charge of my own life, instead of hoping that someone else will know what I want.”

When I first ran across the Blanchard Student Leadership curriculum, I knew I had stumbled on a gold mine—these are the exact leadership lessons that college students need in order to thrive in their transition into the workplace, especially for those who hope to ‘lead at a higher level’ and make a positive impact. I’ve been using their material with dozens of students as they start internships and first jobs, and the ones who implement it are shining examples of the potential this generation has to be leaders and change makers.”

My daughter LOVED her day at BCBSKS. I could tell by looking at her face and the excitement in her voice. Danielle has a greater understanding of achievement and success. I see this by her drive to do better with school academics, sports and music. We thought the day was filled with invaluable lessons and great positivity. Danielle was dreading having to go and when she came out of the class she was feeling excited and motivated. She couldn’t stop thanking me for signing her up. “

We feel that if we can give something back to the communities that give so much to us, we’re doing the right thing to help students help themselves. Students learn direction, support, and basic job skills to go out into the workforce. At AJ Wright and TJX, that’s real important because we’re building the workforce for the future.”

This program will help me to save more time because I will know which level I am at and I can explain it to the others to help me.”

Over 3,000 of our undergraduate members have participated in Self Leadership and SLII®. Those who participate feel better equipped to lead their chapters and better prepared to enter the workplace. Our chapters’ participation in these programs also makes Phi Gamma Delta more attractive to potential members and campuses where we are looking to expand.”

I have always had a passion for great leadership and am humbled by the fact that I’m now able to help young people become the leaders they were meant to be in a meaningful way with this amazing curriculum. I know that the new connection we are forming is going to bear important, life-changing fruit and I am so happy to be able to make a difference in the lives of others. I am now and forever a ‘raving fan’ of the Blanchard Foundation.”

We’ve actually talked about leadership and setting yourself up for good results through planning and positive thinking. My daughter was guilty of negative self talk, when she made a mistake. I have noticed this far less since she took the class. Overall I would say that her confidence has improved.”

This program helped give me the right mindset to be a successful leader and it gave me the tools to capitalize on my skills and knowledge to improve my competence.

Seventh-grade students at Bernardo Heights Middle School had the opportunity to participate in our Student Leadership program sponsored by The Ken Blanchard Companies. The leadership program helped students learn to take responsibility for their actions and to set realistic and measurable academic goals that challenge them to stay motivated to succeed. Additionally, our students learned communication skills that assist them in problem-solving situations with peers, parents, and teachers. It is nice to see more of our students assuming leadership roles on campus.”

Thank you to all of our supporters who help develop tomorrow’s leaders.